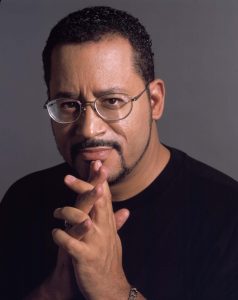 Named one of the 150 most powerful African Americans by Ebony magazine, Dr. Michael Eric Dyson, an American Book Award recipient and two-time NAACP Image Award winner, “is reshaping what it means to be a public intellectual by becoming the most visible black academic of his time.”

Dr. Dyson’s pioneering scholarship has had a profound effect on American ideas, from his first book, 1993’s “Reflecting Black: African American Cultural Criticism,” which helped establish the field of black American cultural studies, to his most recent, “Can You Hear Me Now? The Inspiration, Wisdom, and Insight of Michael Eric Dyson.” His recent book offers a sampling of his sharp wit, profound thought, and edifying eloquence on the enduring problems of humanity, from love to justice, and the latest topics of the day, including race and the presidency.

Dr. Dyson has appeared on nearly every major media outlet and he is also a contributing editor to TIME magazine. In addition, he hosts a news and talk program on NPR, “The Michael Eric Dyson Show,” where he delivers thoughtful analysis of today’s biggest stories from pop culture to race relations.

Dr. Dyson is presently University Professor of Sociology at Georgetown University where, in 2011, he received widespread attention for his course “Sociology of Hip-Hop: Jay-Z.” His legendary rise – from welfare father to Princeton Ph.D., from church pastor to college professor, from a factory worker who didn’t start college until he was 21 to a figure who has become what writer Naomi Wolf terms “the ideal public intellectual of our time” – may help explain why author Nathan McCall simply calls him “a street fighter in suit and tie.” 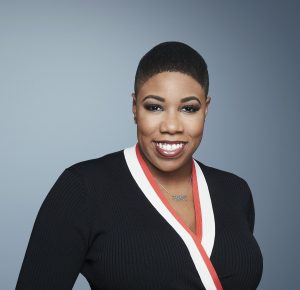 A champion for women, communities of color and those in need, Symone D. Sanders is a democratic strategist, communications consultant, CNN Political Commentator and a Spring 2018 Resident Fellow at Harvard’s Institute of Politics at the Kennedy School. Symone rose to prominence during her tenure as the National Press Secretary for U.S. Sen. Bernie Sanders presidential campaign. At 25, Symone demonstrated an uncanny command of the issues earning her a place in history as the youngest presidential press secretary on record and a spot on Rolling Stone Magazine’s list of 16 young Americans shaping the 2016 election.

However, Symone was not new to presidential politics. When she was 16, she introduced former President Bill Clinton at a luncheon in Omaha, Nebraska. Following her remarks, President Clinton said, “Symone spoke so well I really hate to follow her.” President Clinton went on to write about Symone in his book, Giving: How Each of Us Can Change the World.

Now, Symone draws from her experience on the national stage to provide perceptive analysis on political and social issues. Her lively presentations challenge the conventional wisdom that strong communities are only defined by what we have in common. Instead, she outlines the way our differences contribute to effective social movements.

Symone has been featured on NPR, Fox News, MSNBC, NBC, BET, TV One and currently can be seen on CNN as a Political Commentator. She has been profiled in the Washington Post, the New Yorker, ESSENCE Magazine and ELLE.

Symone is currently Principal of the 360 Group LLC where she provides strategic communications guidance to organizations, businesses, individuals, campaigns and candidates and helps clients find sound solutions to tough political and social problems. 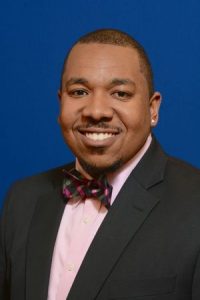 Kaylan Holloway was born and raised in North St. Louis City and received his education in the St. Louis Public School District. Kaylan’s passion for teaching and learning, activism, and social justice was birthed as a high school student. As a student, he realized the importance of and advocated for educational equity at the local and state level. After graduating from high school, he attended the University of Missouri-Columbia. There he grew as a student leader, founding iGUIDE Leadership Team; a mentoring organization designed to increase the retention rate of college students from low-income communities.

After graduating from Mizzou, Kaylan worked for the Missouri House of Representatives as a legislative affairs director. In that position, he observed many ineffective policies that negatively affected public school students. Those encounters, coupled with his desire to work with youth from underserved communities, eventually led to him moving back to his community and becoming an educator.

Kaylan currently works at Central Visual and Performing Arts High School as a social studies teacher and as the founding director of Kings of Distinction Male Mentoring program. Since serving at CVPA, he has received the Fox 2 News Tools for Teachers Award and was selected as the 2017 SLPS Educator of the Year. His classroom curriculum and culture is centered on developing a Culturally Responsive Pedagogy while raising the social, political and cultural consciousness of his students. His work has been featured in DELUX Magazine, St. Louis American Newspaper, and the University of Missouri Alumni Journal. Kaylan has shared his methods for effectively teaching Black students across the country as a school and district-wide professional development facilitator and as an educational consultant for various nonprofit organizations. Additionally, he delivered a TEDx talk on the importance of implementing social justice and equity into the classroom.

Kaylan earned his Master of Education in 2016 and is a current Doctoral Candidate in the Educational Leadership and Administration at Maryville University. He is led by his strong faith, inspiring family values, and an unwavering belief that every child deserves an equitable education. He views teaching as his ministry and purpose in life and looks forward to serving as a transformative school and district leader. 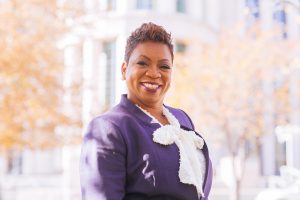 Chalana M. Scales-Ferguson, Esq. is an Assistant Circuit Attorney with the City of St. Louis Circuit Attorney’s Office in St. Louis, Missouri. She is also an Adjunct Professor at Saint Louis University School of Law where she teaches the “Law and Social Change” course. Chalana earned her Juris Doctorate degree with a concentration in employment law from Saint Louis University School of Law and received her undergraduate degree from the University of Missouri-Columbia in Interdisciplinary Studies with emphases in English, Psychology and Black Studies.

Prior to pursuing her legal education, Chalana gained professional experience in corporate and non-profit organizations, while devoting most of her time to raising her two daughters, Jazmyn and Raevyn.  Having had aspirations of becoming an attorney for most of her life, she returned to law school at a time when she felt she could achieve appropriate balance in her family and professional life.  They served as motivation for her completing law school and she knew she was setting an example for them of how to be committed to family while pursuing personal and professional goals.

Chalana is a very passionate and active servant leader, having engaged with civic organizations including the Women’s Leadership Cabinet for the United Way of Greater St. Louis, Susan G. Komen Race for the Cure Steering Committee and the Urban League of Metropolitan St. Louis.  Chalana has devoted countless hours volunteering with organizations such as: Girl Scouts of Eastern Missouri, YWCA Metro St. Louis, Boys and Girls Club of St. Louis and the St. Louis Gateway Classic Sports Foundation.

She is a proud member of Delta Sigma Theta Sorority, Incorporated in which she has held numerous leadership positions and is a current member of the St. Louis Alumnae Chapter. She serves the Sorority’s Central Region as Co-Chair of the Regional Social Action Committee and as a trainer for many of the organization’s endeavors.

In efforts to enhance her leadership and business acumen, Chalana matriculated through the FOCUS-St. Louis Coro Women in Leadership and the St. Louis Business Diversity Initiative Fellows programs.  Chalana has been recognized in the community for her service and leadership as a St. Louis American Salute to Young Leaders Honoree, Ameren Community Lights Awardee, St. Louis Phenomenal Woman Awardee, DELUX Magazine Power 100 Awardee and Urban League Distinctive Young Leaders Honoree. In addition, Chalana has been a featured speaker for numerous programs including the “Ask the Couple” segment on I Heart Radio’s Hallelujah 1600 radio station, UMSL Office of Multicultural Affairs Black Love Panel, YWCA Metro St. Louis, Girls, Incorporated and many other organizations.

In 2012, Chalana, with her husband, Lathon, co-founded Saint Louis F.O.R.C.E. Athleticz, Inc., a volunteer-based non-profit organization for female athletes which emphasized holistic development, not only as an athlete, but also cultivating strong character and commitment to community through service. She has since co-founded, again with her husband, Marriage MasterMYnds, a couples mentoring ministry and network, in which they promote healthy marriages and family life. Chalana resides in Florissant, in suburban St. Louis, with her husband and daughters. 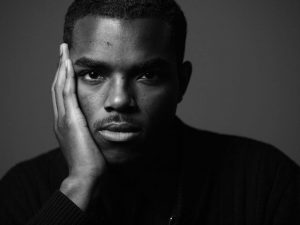 Payton Head is currently pursuing a Master of Arts degree in Public Policy at the University of Chicago’s Harris School of Public Policy with a certification in Global Conflict Studies. Head also serves as Program Coordinator for the Obama Foundation’s inaugural Scholars cohort. His work demonstrates a commitment to developing institutional cultures that are grounded in equity and uniting and uplifting the people of the African Diaspora. He empowers students and campus administrators to fight hatred with radical love for others and for themselves.

Head earned a Bachelor of Arts in Political Science with a minor in Black Studies from the University of Missouri in 2016, where he served as President of the Missouri Students Association. Following the events in Ferguson, he spearheaded conversations about improving race relations throughout the state of Missouri. Head’s viral Facebook post detailing his experience with fighting systemic injustice at Mizzou ignited the student body to fight for a more inclusive campus, establishing the university’s student leaders as change agents in higher education. As a rising community leader, Payton Head details the adversities caused by race, gender and sexual orientation discrimination and offers proven solutions to facilitate open dialogue and embrace marginalized communities.

Passionate about utilizing education and action as tools to affect change, he continues to present to students nationwide on the importance of creating a culture of acceptance. He spent this past summer in the Netherlands and the European Parliament in Strasbourg analyzing the roots of colonialism and the rise of populism in the West.

Payton has been featured on several outlets including MSNBC, CNN, The Washington Post, The Melissa Harris Perry Show, Teen Vogue’s: How 3 Students Changed the Course of History at Their Schools in addition to Spike Lee’s “Two Fists Up” documentary. He serves as Communications Director for University of Chicago’s Black Action in Public Policy Studies and is a proud member of Alpha Phi Alpha Fraternity, Incorporated. 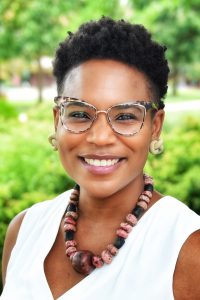 Ashley N. Woodson is a mother, scholar and counterstoryteller, inspired by principles of critical race theory and Afropessimism. She completed her undergraduate studies at Saginaw Valley State University, and her Ph.D. at Michigan State University. Her research and activism supports Black kids’ performances of citizenship. She is the William A. and Jean S. Stauffer Endowed Faculty Fellow and Assistant Professor in the College of Education.